Today, I’ll show you how to install the ever-popular Noctua nhd15 on the AMD am4 platform. The nhd15 has been around for many years in various forms but throughout that time it has been considered one of the very best air coolers ever released and in fact, this very cooler was featured on the blog in November 2021.

I was actually testing on the Intel platform and included an installation video in that shootout, but thanks to the popularity of the zen 2 and zen 3 processors, many people have switched to the am4 platform from AMD. 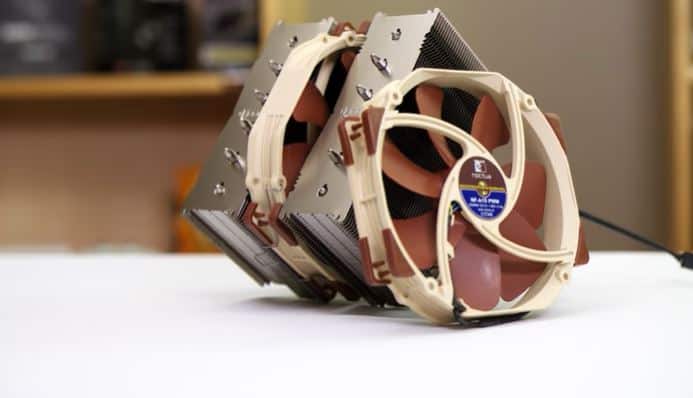 I’d like to move on to the am4 platform and show you how to install this cooler on that platform. I should also mention that there are two versions of this cooler available right now. This is the chroma black edition. There’s also the standard brown edition. This one costs ten dollars more, but the performance is identical, as is the installation process, so you can install either this or the brown version.

The only difference is the color. You may be wondering what these two coolers are sitting next to me for, well these will be featured in an upcoming video where I compare the benchmarks of this cooler versus these two the scythe fuma 2 and the liquid freezer 2360 from arctic together these three coolers probably generate more interest on the channel than every other CPU cooler combined. So, of course, I had to include these in the shootout.

I also have three more big-name liquid coolers in this roundup. I’m not going to reveal them right now, but if you’ve been watching the channel lately, you probably know what they are, and they’ll be featured in the third of a three-part series of videos on high-end coolers for 2021.

So I’m going to alternately tighten each of these screws a little bit, a few turns at a time, to ensure that it’s properly set. I don’t want to bolt down one without making sure the other one is also set because that motherboard backplate may not come through the holes and become jammed against the back of the motherboard, which you don’t want now that I can lay my case down on its side and no longer have to fight gravity. 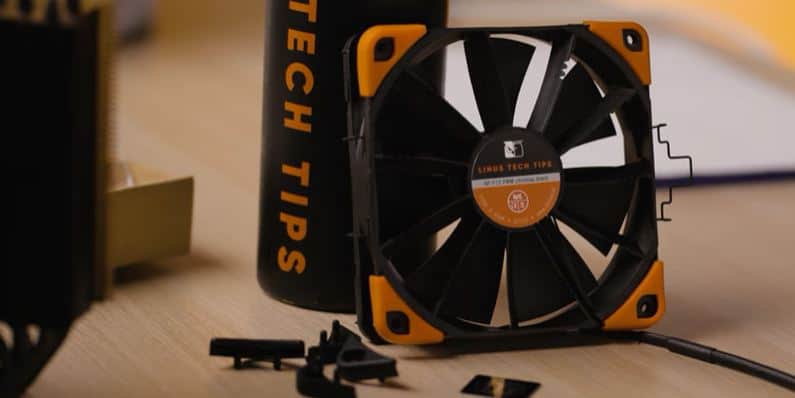 I just put these grey spacers in place. Install the mounting bracket, followed by the two screws, and then tighten these screws a little at a time to ensure you’re always applying equal pressure to both sides of the bracket at the same time. I’ve confirmed that this lower bracket is fully tightened and in place.

I’m finished with this part of the installation; next up is thermal paste; the nth1 that came in the box with the chromax black cooler; you can see it’s partially depressing. So it’s not quite like the retail product, but you get enough in this tube for probably three applications about this much as you can see, and it would be perfectly fine.

If you don’t have any other thermal paste on hand, it’s really good stuff, but I’m going to use nth2 in a much larger vial of it because I do a lot of cooler changes, so this is what I’ll be using for the application. One thing I really like about Noctua thermal paste is that it has a high viscosity but not too high, which means it’s easy to modulate how much you dispense from the tube without losing control and without being too difficult to spread, as you’ll see on this ryzen processor. I actually put four little dots on the corners because it is a relatively large heat spreader compared to, say, an Intel CPU.

The next step is to drop the cooler into place, keeping in mind that there is a right side up and a wrong side up, so here are those Noctua logos because this cooler is entirely symmetric, there is no reason to flip this upside down and have those logos in the wrong orientation.

So now I just drop it into place, noting that the screw is more or less on top of the mounting bracket, and I’ll use my screwdriver to just test that those are in line and get it screwed a little bit to lock this cooler into place. So I can see that I got a little purchase there on the lower screw, but the top screw isn’t quite biting, and I can see it’s still moving, so I just move this around a little bit, keeping in mind that there’s still thermal paste that I’m spreading underneath.

You can actually sit the fan all the way down on the bottom sitting on the bracket, but you’re going to want to raise it up a little bit not too high of course just in the middle of the heatsink so that the air blows through it rather than under it and over it and in this situation. I’m going to have it nearly at the same level as the top of the heatsink and then I’ll clip these fan clips over note that there are two notches and you actually want.

It on the further notch to fully secure the fan and one quick tip for setting the height of that fan is just counting the number of fins above the fan that’s how I know whether or not it’s on the same level on both sides. In case you didn’t know, one of the challenges with this dual fan heatsink is that the front fan is going to sit above your ram, and I’m using a moderately tall RGB ram here, so this fan is going to sit right on top of the ram, and you can see it’s a lot higher than the middle fan.