The new Fenix 6 Series. Now “Series” encapsulates a lot of stuff because there’s a lot of units in there, like 20 something units across the entire series; which is sort of crazy we’ll get that in just a second. 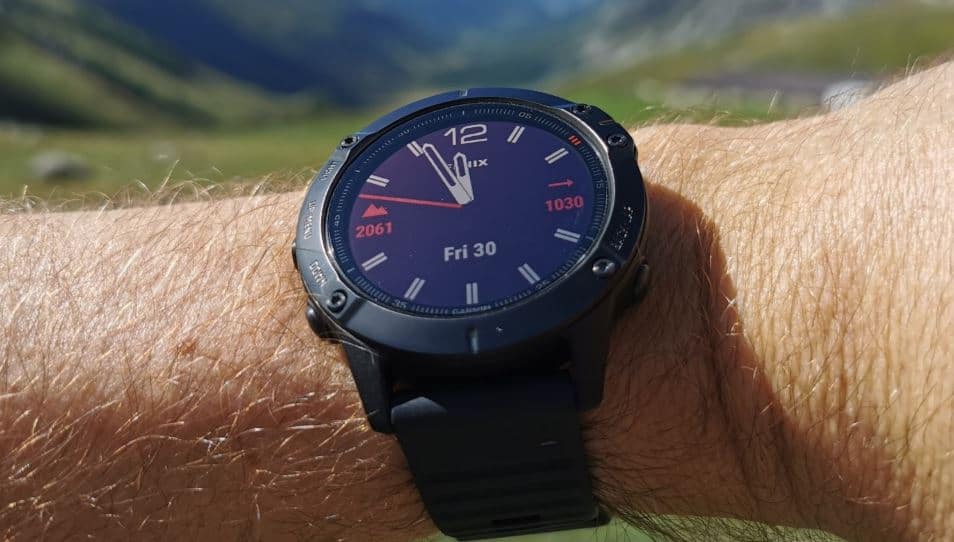 Now in putting these watches through their paces here in the French Alps and actually the Swiss Alps as well, just over there and over there. All the alps, I’ve been through all of them. And in going ahead and testing them out. And trying to dig into some of these new features here, and so I’ve got a pretty good idea of what’s working fairly well, and what’s maybe not working so well.

And so we’re gonna go through all that stuff, but mostly I’m gonna focus on the new stuff in this video. So things that are totally new to the Fenix line, to the Garmin Forerunner line, to the MARQ line, to all the lines basically new stuff.

The first fifteen or so items are basically stuff that’s brand new that you probably haven’t seen before. It’s just me do my thing. Also if you want to check out my full in-depth review down in the description there, that’s where I have a lot more accuracy testing, like elevation, and GPS, and heart rate.

All that stuff that is kind of boring to watch in a video, but is detailed super deep down that video there across a whole bunch of sports, and days, and weeks, and it’s all there, so go check this out.

The base piece takes out the maps, takes out the music, and takes out the Wi-Fi. So it kind of makes it like older Fenix, if you will. But adds in and keeps all of the physio stuff that we’ll talk about a little later on. So all the advanced metrics and all of that kind of stuff are still there.

Now, keep in mind that with that lack of maps, there are other features that kind of depend on that, that fall away. For example, there’s no Climb Pro anymore on the unit itself, there’s no popularity routing on the unit itself, all the stuff that you kind of depend-on on the underlying topo maps data is gone. So I’ll try to note that down at the bottom of the video there when something is not on the base unit. But for the most part, unless I say something, everything you see here is on the base unit. So that gets us to #2 on the list which is solar.

If you go back to the Fenix 5X Plus, that’s where they introduced PulseOx, whereas the rest of the series did not. And, if you go now to the Fenix 6X, and I’m probably gonna screw up these names at some point, this is where they’re introducing solar. Now, if you look just on the inside of the watch, just inside the bezel itself, you’ll see there’s a thin strip. It’s one millimetre all the way around, and that is 100 solar panels. The entire display, including that one-millimetre piece there, is underneath Gorilla Glass, so you’re not gonna scratch the solar panel off.

Whatever you do scratch-wise to the entire display is gonna happen to the entire display. It’s got a gorilla glass covering the entire thing. Now the way Garmin sees this is a way to go ahead and top up your watch, and so it’s not designed to power your watch indefinitely forever. It’s not forever power. But it is pretty close in some scenarios. So if you go ahead and just turn off GPS tracking, and just use it like say you’re out working or something like that. Maybe you have a job that is outdoors, and you just want to use it in regular mode. 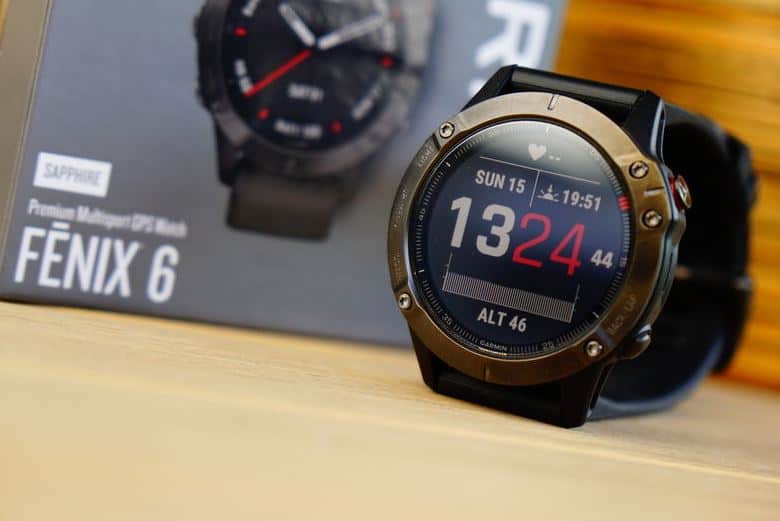 You’ll come pretty darn close on a sunny day to just keeping things neutral across the board. You might slowly dip down depending on how many notifications you have and stuff like that, but more or less pretty neutral. Versus is if you’re out hiking and running like I am today out here, even though it’s super sunny, you’re not going to get like dramatic additions of battery life to this. You’re gonna get a handful of hours. I’ll put that number exactly right now on the screen there. So you can see on the watch exactly these solar intensities in real-time. And it’s pretty impressive. It’s literally real-time.

If I go out of the trees, it takes about two seconds or so to show and reflect that on the screen itself, and you’ll see there’s two different ways to look at it. One is that little sundial right there. That is showing kind of the full intensity. And so if it’s at like, you know, zero, or one, or two bars, it’s probably overcast, fairly overcast in fact. Versus if it’s all the way filled up, then it’s sunny. And right now I’ve got mine all the way filled up here in the sun. Though when I go like this and kinda take it out of the sun because the sun is up there, I’m down at like one to two bars.

I’m way behind my target timeline for this video right now. And so let’s talk about Trendline Popularity Routing. It was something Garmin introduced last year in the Fenix 5 Plus series. And essentially that takes all the heat-map data that Garmin gathers from probably about a million activities a day (GPS activities), they have on Garmin Connect, and it puts it in the watch from a data standpoint. But previously you couldn’t actually see that heat map on your watch itself.

The data was there, you would route over the top of it, called popularity routing, and that worked great, but now you can actually see it. Now you can toggle a map layer that goes ahead and shows you the exact Trendline Popularity Routing of your area. And it’s cool but there are definitely some limitations that are becoming super visible here, even in a place like Chamonix, it’s like, just all outdoor people all the time, and tons of people wearing GPS watches.