Today, we review the DJI Mavic 2 Pro new features. The original Mavic Pro launched almost two years ago, in September of 2016. DJI took the Phantom 4, crammed all of its features into this small and compact drone. Everything was good. Yet we started thinking of what-ifs. What if we could get an RX100 style sensor on something smaller than the Inspire series? DJI released the Phantom 4 Pro with its huge one-inch sensor.

We got used to carrying around our compact Mavic Pros. Now, the only option on this level of quality was to move around this, once again, larger Phantom. The styrofoam cooler was back in the car. Since the Phantom 4 Pro release, the dream of having that larger camera and sensor on something as compact, or close to as compact as the Mavic Pro, was in people’s heads. Check out DJI Spark Black Friday Deals.

A new Hasselblad camera features a substantial one-inch sensor from Sony. That sounds fantastic, you might say, but what does it mean? Let’s take a look at this diagram. This is here depicts the original Mavic Pro sensor, which is one over 2.3 inches. And if you compare to this, this is the one-inch sensor featured in the Mavic 2 Pro.

You can see it’s practically four times the size for fun; this is the Micro 4/3 sensor found in the X5 and X5S of Inspire 1 and 2. The lens also received some upgrades for the first time on a Mavic series, physical aperture blades From F2.8 to F11. This allows for larger flexibility in selecting shutter speeds for videos and photos.

The camera housing and camera are made from a magnesium alloy for heat absorption and strength. Other improvements are 100 Megabit per second recording bandwidth, a 10-bit D-LOG colour profile, and HDR video using the 10-bit HLG standard.

We also have an entire field of view mode when recording a 4K video. And a high-quality 4K mode that features one-to-one pixel read-out. In full HD, we can now record 120 frames per second. The rolling shutter has been improved, and enhanced HDR allows for better HDR images. Next up, OcuSync 2.0.

Up to 31 minutes of flight time if you fly in perfect conditions. What does this mean for ordinary people, like you and me? Well, with the original Mavic Pro, I got around 20 minutes of flight time. With the Mavic 2 Pro, I see about 25 minutes of flight time. It might not sound like much, but that extra five minutes might be the difference between getting the shot and not. We get a new top speed for sport mode, 72 kilometres an hour that works out to be 44.7 miles per hour.

There are even LEDs on the bottom for those low-light landings—active Track 2.0. For your amusement, in a bit, I will wander through a forest in the middle of nowhere, almost stepping on ant hills, to test the Active Track 2.0. With the new hardware and additional cameras, this gets much better than on the original Mavic Pro. And, finally, a feature I’m excited about. Hyperlapse.

How do you prove a time-lapse that you do on land? You put the camera in the air and make it move. If I have piqued your interest in the Mavic 2 Pro after this review, I’d appreciate it if you checked it out with the link in the description below.

The remote control features the removable sticks that we first saw on the Mavic Air. Two other things were noticeable: One, the drone feels quiet. Just a short distance away, you can have a normal conversation with someone standing next to you. With its additional weight, it seems more stable in the air. 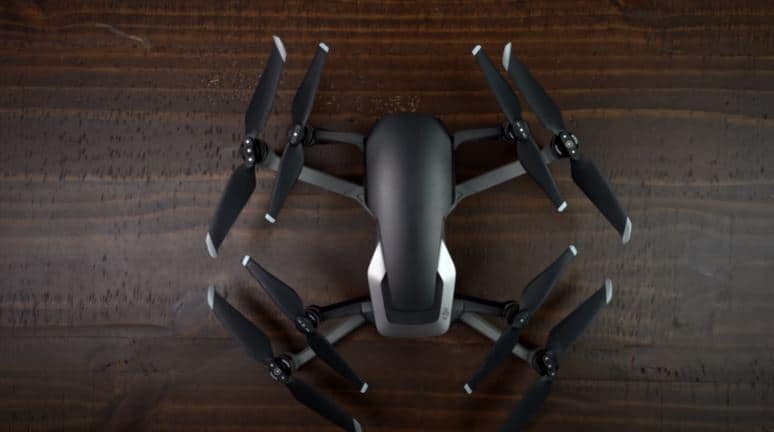 In HQ mode, we get a 4K crop from the middle. So that’s why there’s a little bit less field of view. But, the image is just slightly more refined because every single pixel gets used inside the crop, that is.

Luckily, on the Mavic 2 Pro, it’s been improved quite a bit and looks quite decent. I’ve never been so happy to see such detailed and always a great perspective from a drone shooting straight down. What’s great about these, these are processed on board. No editing is required. You can also choose to save RAW photos for your custom post-processing.