Bose was kind enough to sponsor this video, and I’ve partnered up with them to review some of their exciting new audio products. In this video, I’ll be reviewing the Bose Wave SoundTouch Music System IV. This is a room-filling wireless speaker with some other convenient elements built into it. So stick around and find out if this is right for you. The Wave SoundTouch Music System IV is a feature-packed speaker that is looking to be an all-in-one solution for music lovers. It currently comes in 2 colours, espresso black and platinum silver. Check out Bose SoundTouch 300 deals. 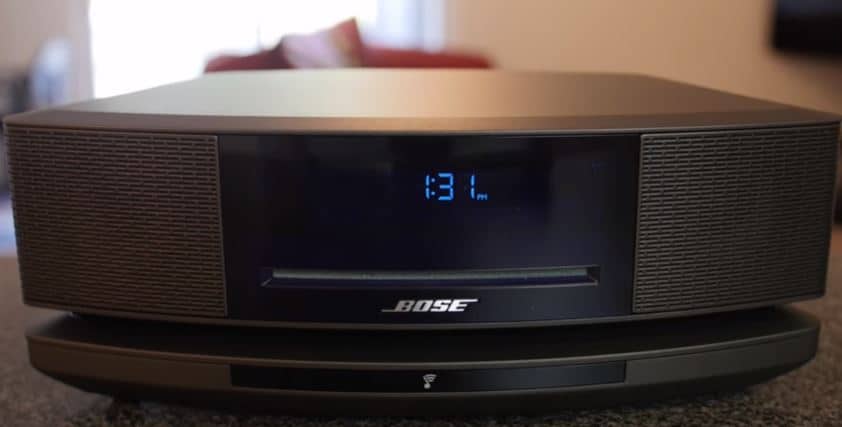 The system is about 5.5″ tall,14.5″ wide, and around 8.5″ deep and it weighs just under 10 pounds. You can wirelessly stream music to the speaker via Bluetooth or WiFi using a compatible device such as your smartphone, tablet, or computer. It also has a built-in radio which I was able to tune into my favourite radio stations just fine with no need for an external antenna.

It has dual alarms which come in handy if you and your partner need to get up at separate times, and it also has a CD player built-in just in case you can’t seem to give up those mixed CDs that you burned in 2007. You know who you are. The first thing you might notice about this speaker is that it’s really attractive. It’s very sleek and it looks good just about anywhere in your home.

There is no physical power switch because to turn it on and off all you need to do is tap the top of the speaker. Now other than the fact that it’s an all-in-one system, the sound that it produces from such a compact speaker is one of its best selling points. It’s able to produce a clean, rich room-filling sound by utilizing the Bose WaveGuide technology. This is essentially a series of passages from the speaker driver to the speaker grill that guides air through two 26″ folded waveguides. It makes it possible for a compact system like this one to replicate a larger system’s stereo sound. I was able to play music from the corner of my living room and you couldn’t really pinpoint exactly where the sound was coming from. So it has a crisp loud sound quality for sure, but as with many Bose products the bass is very strong. Luckily if you don’t like a strong bass it’s easy to reduce through the system settings. Even though it does have an AUX port, this speaker’s most notable feature is its wireless capability. 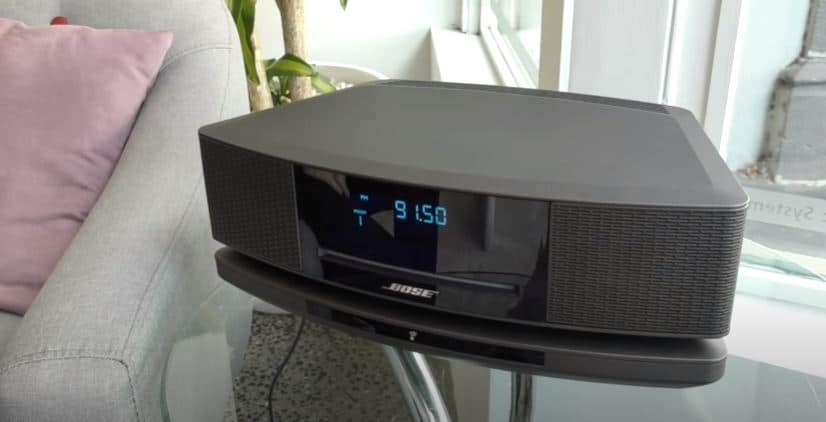 With built-in Bluetooth, you can easily pair it with your smartphone, tablet, or computer and start playing audio immediately. But with the free SoundTouch app you can easily connect the Wave SoundTouch Music System to your WiFi network and play music from popular music services such as Pandora, Spotify, Amazon Prime music, thousands of Internet radio stations and even your own music library. Once your music sources are connected you can play them through the speaker via the SoundTouch app.

I pretty much exclusively use Spotify and Pandora on mine, and it seems to work great with both of those. One drawback of playing music through the SoundTouch app is you can’t use your phone’s volume buttons when your phone is locked to adjust the volume. You have to unlock your device to do that or you have to use the included infrared remote. Now I do love this speaker’s ability to set presets with the SoundTouch app. You can set any of your connected songs, albums, playlists, artists or stations to any of the 6 presets and you can then use the SoundTouch app or the remote to press any of those presets and the speaker will automatically start playing that music even if it was turned off. I also love the informational display that shows the title of what’s currently playing.

Now since this speaker is part of the Bose SoundTouch family, you are able to easily add more SoundTouch speakers to your home and then with the free SoundTouch app you can play music across all the different speakers at the same time or play different music on different speakers. It’s not cheap, but if you’re looking for an all-in-one music system that has built-in alarms, AM/FM radio, and a CD player but mainly excels in sound quality and wireless playback then the Wave SoundTouch Music System IV may be a good investment for you. I would definitely recommend this to people who want a high-quality speaker combo.