Anki overdrive was nice enough to send this along, and within the box, you get four cars. You get a track that you can assemble, and then you use your smartphone, and you get a base station along with the wall plug ac adapter and USB connector. These cars are pretty neat. They’re kind of intelligent; they know where the other vehicles are on track, and the road has no slots it’s a slot car track without the places, and then the cars have the intelligence you can upgrade them using the app so first what you need to do is set up. 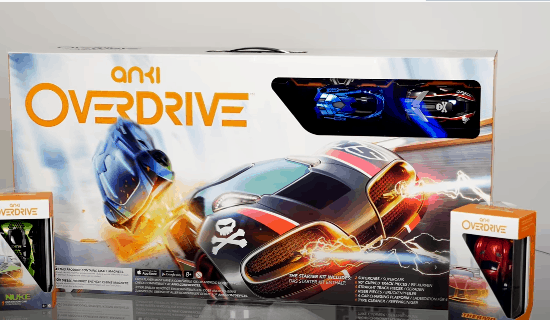 The track has magnets on either side. It’s a plasticized cardboard, almost is what it feels like, so here you have the track, and it’s skinny you can get water on it, but it does get slippery want to wipe this down. The cars will slide all over it, but what’s neat is they stay within the track. They don’t go outside of that. They have intelligence built-in so that they can avoid one another. So while they’re racing, they know which ones are in front and the back and then moves over. You can tilt your phone to move them side to side around the track, and then you can use weapons to slow them down, and it’s pretty neat.

Once you’ve got them on the base station, you can set up the phone within the app. You’ve got some pretty neat things you’ve set this up; what you need to do is go through the tutorial. It’ll bring you through everything but then after playing it for a while and my children like this a lot after playing it a while, you start to upgrade your vehicles, so you’ll see I have two new upgrades on the skull vehicle, and it says items, and here we have a photon anchor.

Press the bottom trigger to drop an anchor and bring the skull to a screeching halt as you watch your opponent’s sail past you in your sights so one of these things would stop you, and then your opponent goes past, and that allows you to attack them using whatever weapons you might have.

I also have some speed limit boost; it says skulls top speed will increase my limited amount, allowing you to drive faster, so let me equip that so now we’ve got a couple of fitted different things. As you play this, they up great. You can buy other cars to get these in the store. You’ve also got some super trucks that you can buy in the store and add on later once you’ve got your track assembled and everything together; what you do is go into the app, and you’ll want to create or join a game. 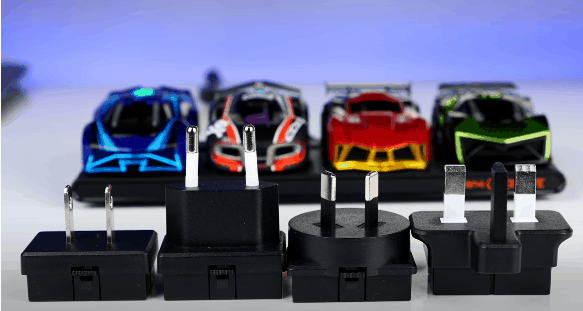 Once you’ve joined, you need to scan the track the cars drive around it. They learn the road, and then they line themselves up on the starting line. Now you can play this by yourself or with a nearby opponent. You can have up to four cars on the track at a time, so you’ll see the cars are going around the road, and I can tilt the phone left or right to move my vehicle left or right. I have a couple of different weapons. I can slow down the car in the front, I can shoot it with lasers, and it will actually stop it in its tracks, and I can pass by now if I’m doing 15 laps, it will keep going like this until the end and then whoever wins.

The race and you can do another game, and there are many different games you can set up all these other tracks however you want you can buy additional pieces, of course, it’s not necessarily inexpensive.

The bottom of the car has two wheels that move and steer the car and the batteries built-in. There’s a sensor upfront; the front wheels don’t turn at all. Still, the back wheels do all of the work you charge the cars using the included dock. It charges up to four at a time, and they only take about eight to ten minutes per charge. Each one of those will give you about four to five races. In my testing, Auki has pretty innovative products.

They have other products other than overdrive; they have a little robot that maybe we will take a look at in the future if I can get my hands on one; this is pretty neat. However, I like the Anki overdrive, and my kids love it. I’ll probably pick up a couple more cars myself, and we’ll try it as well and maybe some more tracks to make a bigger track.